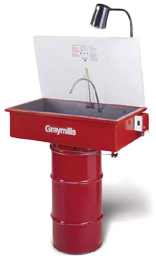 Graymills has developed/modified our solvent parts washers to comply with the commonly accepted definition of “Freeboard”.

The Ozone Transport Commission (OTC) is a group of 12 states and the District of Columbia in the upper Middle Atlantic region through the Northeast. Congress passed legislation in 1990 creating the Commission for developing a unified approach to the growing ozone pollution problem in the Northeast. The OTC has been assembling a plan and issuing guidelines to control ozone and other emissions within the Commission states.

One guideline was the issued to the states was that “cold solvent cleaners or degreasers” should have a freeboard ratio of 0.75. This requirement was “borrowed” from the Halogenated Solvent NESHAPS (National Emission Standards for Hazardous Air Pollutants). Due to the volatility of those solvents, the U.S. EPA designated the 0.75 freeboard standard to reduce air currents through the vapor zone of parts cleaners. The farther down the solvent is in the machine (greater freeboard ratio) the better that it can retain the vapors above the solvent layer. Freeboard is that portion of a tank’s or a tank-like enclosure’s capacity that is not used for holding a liquid. In the absence of an appropriate standard for less volatile hydrocarbon solvents, this ratio was adopted by the OTC states as well as other states, most notably Texas.

The guideline for instituting a freeboard ratio for "cold solvent cleaners" is just that, a guideline. The states are free to adopt alternate regulations. Some have, such as Maryland and Pennsylvania, and use a volatility standard for the parts washer solvent to override the freeboard ratio requirement.

Graymills has developed several units that comply with the OTC standard Freeboard Ratio of .75:

Click here to Request A Quote
or call us today at 1.773.248.6825 for more information about Graymills

Ask Us A Quick Question